How To Play Piano Chords That Sound Good

Perhaps you’re one of the lucky ones, but I’m guessing that no one ever took the time to show you exactly how to play piano chords in a way that makes them sound REALLY GOOD.

If that’s the case, keep reading, because I’ve got some simple rules that will help you, along with a brand new chord resource I just finished putting together.

So, how to play piano chords so they sound “good”…

Although “beauty” in music – as in other art forms – is highly subjective, I believe there are some things you can do to make the piano chord you play sound really good, meaning better than the way most people usually play them.

Feel free to agree or disagree with me in the comments – I think there’s no right or wrong answer, but check out these suggestions and see if they don’t help your piano chord playing, at least a little bit.

1. Whenever possible, when playing “close position” chords – meaning the chord tones are consecutive and not spread widely apart, like they are in open chord voicings – try to play the chords as close to middle C as possible. Once you start getting too much higher, the chords start to “thin out” in their sound. They still work for certain songs, but they just don’t have the depth that most often sounds good. If you got too much lower than middle C, the chords really start to sound muddy and thick. Which brings us to suggestion #2…

2. As you play chords lower and lower on the piano, it’s best to move one or more of the chord tones apart from the others. For example, if you play a C major tried one – or even two – octaves below middle C, it really sounds kind of awful. But, if you play a very low C in the bass, and play just the C and E an octave or two above that, it sounds pretty good. You can also play an open C major voicing on the C (root), then G (fifth), then the E above the G (the 10th, technically). This open voicing sounds really good in the left hand, and helps to “un-muddy” a plain old major triad.

4. Here’s a chord rhythm suggestion for you – DON’T OVERDO THE CHORD RHYTHMS! Sometimes just a simple bass pattern with the occasional chord interjected is just fine – less is more. Don’t feel like you need to play the entire chord on every beat of the song, or even every time the chords change. Take it easy. Leave some space. Enjoy the silence between the notes.

5. Try a different inversion, even for basic piano chord triads. Sometimes the 1st or 2nd inversion sounds much better than the other inversions, and darned if I could tell you why. Remember, an inversion is when you play the chord with something other than the chord root on the bottom.

These are just a few quick pointers to help you improve the sound of your piano chords – try them out and let me know what you thing.

And, if you REALLY want to make your chords sound awesome AND get your hands on what might be the last chord guide you’ll ever need, be sure to check out my super chord reference, Piano Chord Voicings… FAST! 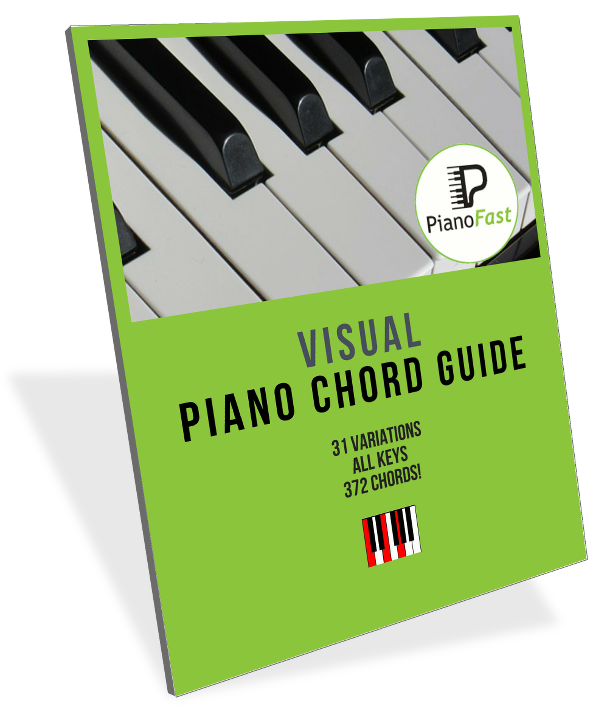